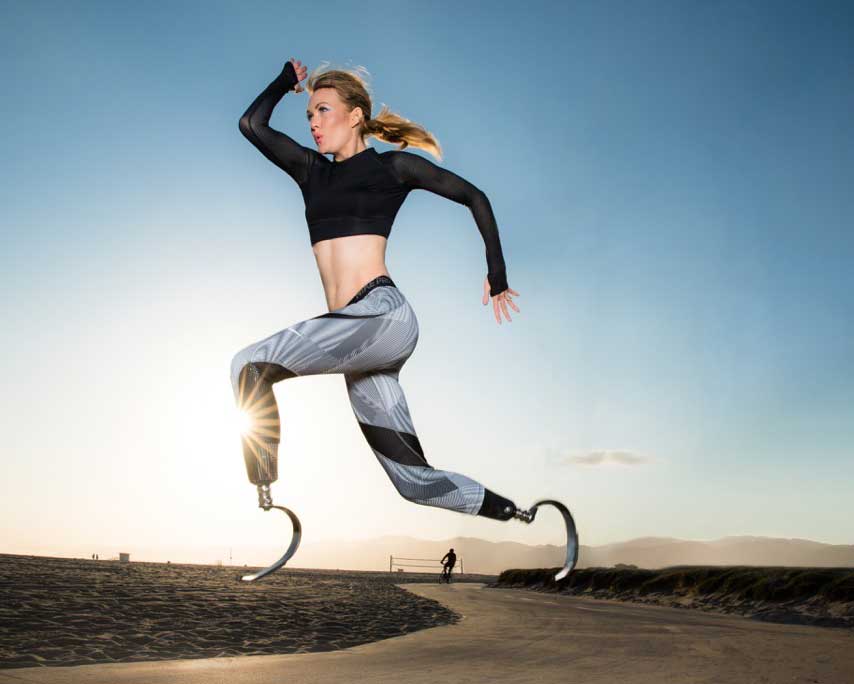 At 19, after experiencing flu-like symptoms, Amy, a massage therapist, was rushed to the hospital in a state of septic shock. En route, she experienced respiratory and multiple organ failure which caused her to lose circulation to her extremities.

When she entered into the hospital she was given less than a 2% chance of survival, put on life support and placed into a coma. After multiple blood transfusions, and the removal of her ruptured spleen, doctors diagnosed Amy with Meningococcal Meningitis, a highly deadly bacterial blood infection.

Due to septic shock, doctors had to amputate her legs below the knee. She later received a donated kidney from her father a week before her 21st birthday.

After going through this life-altering experience, Amy challenged herself to move on with her life and attain goals that even those who have both legs struggle to achieve. Just three months after her kidney transplant, Amy entered the USASA National Snowboarding Championship where she won medals in three events. Today, she is the most decorated Paralympic snowboarder in U.S. history and a three-time Paralympic Medalist.

Amy's creativity, positive outlook, and her never-give-up attitude have opened doors to many other opportunities including being featured in a Madonna music video and a lead actress role in an award-winning film. She and her husband were featured on the TV show The Amazing Race and most recently Amy came in 2nd Place on the hit ABC show Dancing with the Stars with her partner Derek Hough.

Amy has evolved into a powerful motivational keynote speaker who has literally been seen by millions of people and invited to speak to audiences around the world from small groups to the largest corporations in the world.

She’s toured the country sharing her remarkable story alongside Oprah Winfrey as part of Oprah’s The Life You Want Tour. She was featured in a SuperBowl commercial which has since been named one of the Top 20 SuperBowl Commercials Of All Time.

Her autobiography, On My Own Two Feet, quickly became a New York Times Best Seller and is now published around the world in ten different languages.

Amy is also a Founder of Adaptive Action Sports with her husband that trains athletes with disabilities in action sports. Their organization is top in the US for developing Paralympic Snowboarders.